The graph below shows the different modes of transport used to travel to and from work in one European city in 1960, 1980 and 2000.

» You should write at least 150 words.
» You should not spend more than 20 minutes on this task. 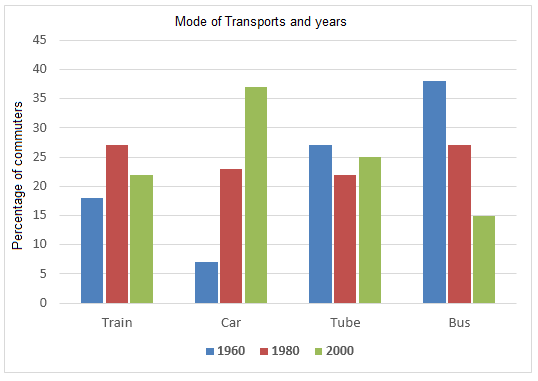 Sample Answer 1:
The diagram delineates the type of transportations citizens of a European country used to travel to and from their workplaces in three different years – 1960, 1980 and 2000. As an overall trend, cars gained a huge popularity as the mode of commuting while bus lost its appeal as a viable mode of communication to these Europeans.

As the diagram suggests, around four out of ten of these Europeans used buses to reach their offices and to get back homes in 1960. Tubes were the second most prefered mode of transportation as more 25% people took this form of vehicle. Interestingly, Only around one in every 18 people used cars to travel while trains were preferred by roughly 18% citizens for commuting to and from offices. After two decades, trains and personal cars gained their demands as more than half of the population used these two forms of transports. Tubes and buses retained less proportion of commuters in this year and buses seem like lost its attraction as a mode of transportation.

Finally, in 2000, more than one-third of these Europeans started using cars while only 15% of them used buses to travel to and from their workplaces. Tubes retained almost one-fourth of the commuters while train usage stood just above 20%.

Sample Answer 2:
The given bar graph shows data on the type of transportation used to go to work and to return from the work in three different years. As is noticed from the given data, private car has become the most popular mode of transportation for the office goers and over time the popularity of bus has decreased.

As is observed, people started preferring private cars over the public bus and train over the time.

Model Answer 3:
The provided bar graph compares the types of transportation used by commuters in one European city in three different years commencing from 1960. Four transportation types- train, car, tube and bus are compared in the graph and it is evident that in this European city people used buses in early years but started preferring cars and tubes in later years to reach and return from their workplaces.

Sample Answer 4:
The provided bar graph gives information on the four types of transports used in one European city during 1960, 1980 and 2000. As evident from the chart, major changes were observed in the usage of cars and buses and cars become the most preferred transportation type in the later year.

In 1960, the maximum proportion of people travelled by bus (about 38%) compared to the 6% car owners. On the contrary, in 2000 around 37% population preferred travelling by cars, whereas only 15% bus passengers were there. The proportion of people who used tubes for transportation remained on an average between 20% to 30% during the 3 years period. It shows that tubes were popular even in later years. On the other hand, commuters who travelled by train increased from 19% in 1960 to 28% in 1980. However, the figures reduced to 22% by 2000. Cars and buses as transportations showed an opposite trend in their popularity.

To summarise, there was a tremendous rise in the usage of cars for travelling to and from the office from 1960 to 2000.