» You should spend about 20 minutes on this task.

The graphs below show the average monthly expenditure on children’s sports and participation in different sports in the UK from 2008 to 2014.

Summarise the information by selecting and reporting the main features and make comparisons where relevant. 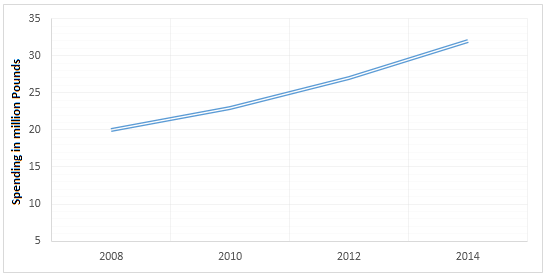 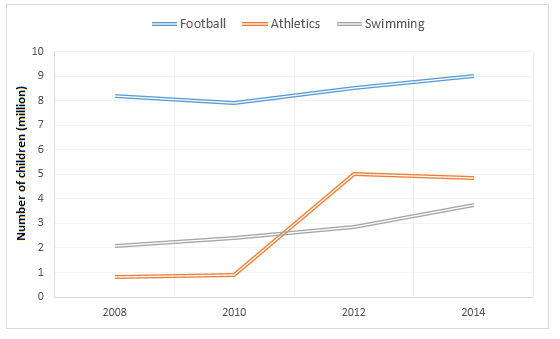 Sample Answer:
The line graphs depict average monthly spending on children’s sporting activities and the number of children who took part in football, athletics and swimming in the United Kingdom between 2008 and 2014. Overall, monthly spending on children’s sports increased over the time and football was the most popular sports among the British children.

According to the first line chart, 20 million pounds was spent monthly, on an average, in 2008 for British children’s sporting activities which continually went up in the subsequent years. The expenditure in 2011 reached to over 25 million pounds and in 2014, this cost was as high as 32 million pounds approximately.

In 2008, roughly 8 million children participated in football while 1 to 2 million in swimming and athletics, making football the most widely played sports in the UK. However, the popularity of swimming grew and in 2014 roughly 3.8 million participants took this activity. With a steady rise in popularity, athletics was taken up by nearly 5 million children in 2014. Football participants range from 7.6 to 9 million during this period, considerably higher than the participants in other two activities. It is worth noticing that more children participated in these sports in 2014 than they did in 2008.