The diagram below shows the number of houses built per year in two cities, Derby and Nottingham, Between 2000 and 2009.

Write a report for a university lecturer describing the information shown below. 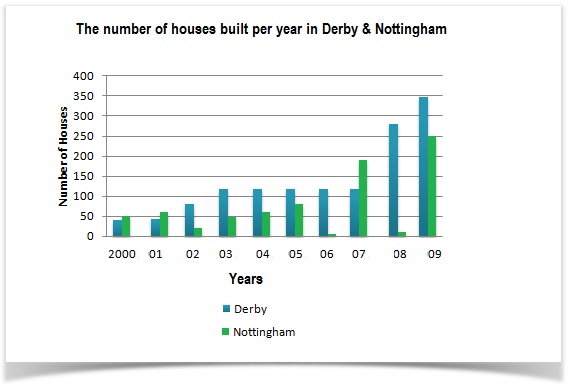 Model Answer 1:
The bar chart compares the construction of new houses in two cities – Derby and Nottingham, from 2000 to 2009. Generally speaking, the number of new homes in these two cities increased steadily through the years and inhabitants of Derby end up building more abodes in the final year despite a considerable gap in the previous year.

As the data suggest, around 95 residences were built in these two cities in 2000 and 50 of them were established in Nottingham. In 2002, roughly 70 further houses came into existence in Derby which was considerably higher than the development of new abodes in Nottingham. This trend continued until 2005. Next year, almost no new houses were built in Nottingham but Derby witnessed the creation of almost 110 new homes. In 2007, a reverse case was obvious when around 190 brand new buildings were made in Nottingham compared to just over 100 in Derby. Building new homes in 2008 showed another anomaly when an ignorable number of new homes were developed in Nottingham against nearly 280 brand new houses in Derby. In the final year, 250 new dwellings were added to Nottingham city while almost 350 were developed for Derby residents.

Sample Answer 2:
The chart outlines the number of houses built annually in Derby and Nottingham cities from 2000 to 2009. Overall, more houses were built in Derby than Nottingham each year except in 2000, 2001 and 2007.

In summary, over the time, the number of houses that were built in Derby increased almost in each year while this showed some anomaly in Nottingham where fewer houses were built than Derby, except in 2000, 2001 and 2007.