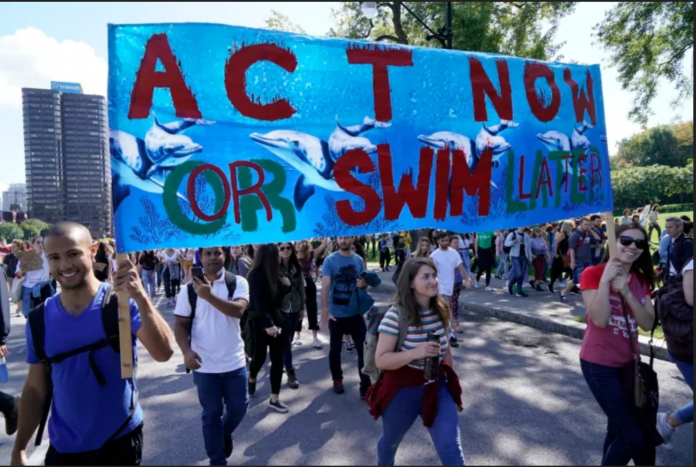 Trudeau met the teenage activist ahead of this morning’s mass climate rally in Montreal in his capacity as prime minister. The pair spoke in private for about 15 minutes, shortly before Trudeau joined the rally marching through the city’s downtown.

After the meeting, Thunberg was asked if she had a message for Trudeau. She said that Trudeau is not doing enough — but added that she says the same thing to every political leader she meets.

“My message to all the politicians around the world is the same: just listen and act on the current, best available united science,” she said.

“I try not to focus on the individuals and rather focus on the whole picture because … of course it’s easier to just blame someone and of course he has a lot of responsibility … and he, of course, is not doing enough.

“But we need to, because this is such a huge problem. This is a system that is wrong. So my message to all the politicians is the same — to just listen to the science and act on the science.”

Liberal Leader Justin Trudeau met with Swedish teen climate change activist Greta Thunberg this morning ahead of a mass rally in Montreal calling for urgent action to fight climate change. He met with her in his capacity as prime minister and the pair spoke in private for about 15 minutes. 0:54

In a news conference announcing a proposal to plant trees to combat climate change, Trudeau called Thunberg a “remarkable” young person who is driving the conversation forward.

“She is the voice of a generation of young people who are calling on their leaders to do more and to do better, and I’m listening,” he said.

Trudeau was asked about a June 19 tweet from Thunberg in which she questioned Canada’s decision to declare a climate emergency one day and say yes to expanding the Trans Mountain pipeline the next.

“This is shameful. But of course this is not only in Canada, we can unfortunately see the same pattern everywhere,” she said.

“We have a national climate plan that will reduce our emissions and hit our 2030 targets in a way that also includes getting a better price for our oil resources that allows us to put the profits directly into the fight against climate change,” he said.

Trudeau had a large security detail surrounding him and his family as they joined the crowds on the streets of Montreal for the climate rally. Some in the crowd chanted slogans attacking Trudeau’s embrace of the Trans Mountain pipeline expansion.

At one point, RCMP tackled a protester to the ground.

RCMP security detail officers tackled a protester who approached Justin Trudeau as the Liberal leader and his family marched in the Montreal climate rally. 0:36

As millions of young people around the world took to the streets today to call for urgent action on climate change, the Liberal leader promised to plant two billion trees if his government is re-elected.

Trudeau said the initiative would use the power of nature to fight climate change, help cities expand and diversify urban forests, better protect trees from infestation and help rebuild forests after wildfires.

The program would support an estimated 3,500 seasonal jobs in tree planting, according to the Liberal Party.

The tree planting initiative would be part of a broader $3 billion, 10-year fund to support efforts across the country to better manage, conserve, and restore forests, grasslands, agricultural lands, wetlands and coastal areas that help store and take carbon pollution out of the air.

According to Liberal Party background documents, the initiative would be an annual investment of $300 million, starting in 2020-21, with costs offset by revenues from the Trans Mountain pipeline.

Further details related to costing will be released over the course of the campaign, the party claims.

Trudeau took the opportunity to attack Conservative Leader Andrew Scheer for skipping the rally. Scheer was travelling to B.C. this morning for several campaign events.

“Mr. Trudeau promised really clearly in 2015 that he would not build the Trans Mountain, that he would oppose it. And then once he got into office, not only did he break that promise, he bought the pipeline then approved its expansion the day after he declared a climate emergency,” he said.

“That is something that should have everyone pause, and that’s why Canadians are saying we can’t trust and we don’t believe Mr. Trudeau.”

In an interview with CBC Montreal’s Daybreak Friday, May said voters need to elect a party that is up to the challenge and ready with a concrete plan to reduce emissions and create jobs in the growing green economy.

“We want to ensure that in this election, which I think is really a referendum on climate change, voters recognize that, if you really want to see a green policy, you’ve got to vote for a party that is really going to hold the line and ensure that we don’t go above 1.5 degrees Celsius,” she said.

Joining Thunberg at the rally earlier today was Assembly of First Nations National Chief Perry Bellegarde, who praised her for her leadership.

“You don’t have to be elected to be a leader. You are leading,” he said.

While Thunberg has been praised for her efforts by many world leaders, she’s also come in for some pointed criticism from politicians on the right, including U.S. President Donald Trump and People’s Party of Canada Leader Maxime Bernier.

Bernier has described Thunberg on Twitter as “clearly mentally unstable” and suggested her climate activism is spreading irrational fears about the environment.

Trump tried to throw shade on Thunberg following her impassioned speech to the United Nations earlier this week, describing the activist as a “happy young girl looking forward to a bright and wonderful future.” In response, Thunberg trolled Trump by sarcastically adding Trump’s description of her to her Twitter profile.

‘People want to silence us’

Today, Thunberg suggested these politicians are attacking her out of fear.

“I don’t understand why grownups would choose to mock children and teenagers for just communicating and acting on the science when they could do something good instead,” she said.

“I guess they must feel like their world view or their interests, or whatever it is, is threatened by us. And we should take as a compliment that we are having so much impact that people want to silence us.”

During their earlier meeting, Trudeau asked Thunberg what her friends back home thought about the march. She told the Liberal leader there will be about 60,000 people marching in Stockholm today.

“A few more than that today,” Trudeau responded.

Thunberg said she was pleased with the size of the crowd in Montreal.

Addressing the crowd today, Thunberg said she did not have a prepared speech but she was thrilled to be among people gathered for “a common cause.”